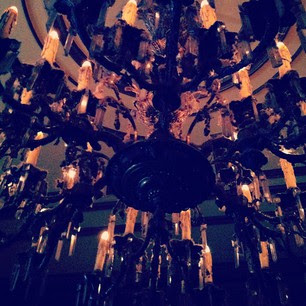 What has become obvious from my previous post on Gender is the frustrating lack of clarity in the English language. Words seem to carry different weight depending on the person reading/hearing them and the person writing/speaking them. This is due, I think, to two things.

First and foremost, I believe that for Christians words have an inherent “meaning” that we assume to be absolute. This is itself due to the protestant impetus of being “people of the Word” and the unfortunate development of English within this tradition. The Greek word logos that is translated “word” in English carries a different meaning than our English word, “word”, and means something more akin to “revelation”. But we read it as “word”. The association that we make between “word/Logos” and “word/word” means that over time we equate words with Jesus. Thus, our communication is boiled down to speaking and writing cognitively.

This would be okay if life were monolithic (of one type of communication), but it isn’t. Nor is it dialectic (of only two options). Instead, communication requires context and connotations. Words do not have an absolute meaning aside from what is assigned to them by the people using them. This leads me to my second point:

We’ve assumed a Platonic Reality of meaning. We believe that somewhere outside the Cave of human experience there lies a real thing that is “Meaning”. We believe that at their core words have a meaning all of their own, and nothing can change that. This of course stems from the New Testament writers borrowing Platonic language to communicate the ultimate reality of God as beyond the scope of human experience, which is of course true. However, due to the human inclination to draw lines of association and find “like kinds”, we quickly (or not so quickly, depending on who you read) developed “Realities” of things like Truth, Justice, Love, Meaning, etc. Thus we constructed Idols of penultimate things in our own minds that exist, if not as parts of God, at least in the same realm as God. Thus, to think of words like “Truth”, “Meaning” or “Love” as self sustaining entities like God is nothing short of idolatry. Only God can be God.

This phenomenon translates into an assumption of the absolute nature of words and meaning.

Now here’s the kicker: we don’t actually know what the words we are using denote and connote. And such was the case with my previous post on Gender. I assumed a certain meaning of gender that was not shared by everyone the world over. So here’s what I mean by “Gender”: Gender is a function that a person performs or is expected to perform by society. It is an office or position, not a biological reality. Gender identification then refers to the social position a person finds themselves identifying with emotionally or psychologically. Gender is thus a means of identification for an individual within a communal setting, and is closely tied with the way that individual understands him/herself.

What I was addressing was not sexual orientation or biological sexuality. There is of course a correlation between Gender and biological sexuality/sexual orientation, but the two are not the same thing. I was instead addressing the emotional agony that accompanies social homelessness, or, loss of ability to identify with a social office, and how Christians ought to react to such people. Which is to say how people ought to react to such people.

Forgive my oversimplification, but this is only a blog post.