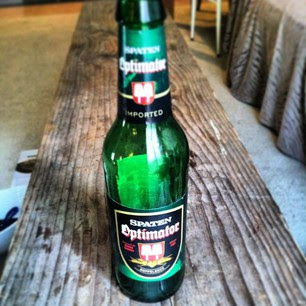 So Doppelbock’s are not always my favorite, but I’ve been hearing such good things about Spaten Optimator I figured I’d give it a try. And that try warranted a review here.

I was quite pleasantly surprised by the complexity of flavor in the Optimator: there is an initial sweetness followed by a savory body that settles on the outside of the tongue. The aftertaste has two stages. The initial stage is standard Doppelbock; a good dose of hops. The second stage is more of what I’ve come to expect from a Belgian ale; a lingering sweetness that brings to mind caramel.

All in all, a very enjoyable beer, and it may have made a Doppelbock fan out of me… for now.

One side note: this is a strong beer, if you have two, do not plan on driving.