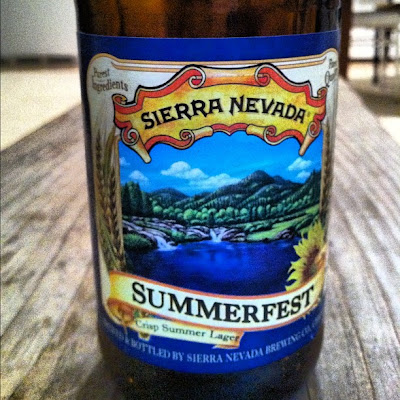 Whether we like it or not, we are all driven by the need to be meaningful. We want our lives to mean something, and we are willing to look almost anywhere for that meaning. Some of us find our meaning in creating something beautiful, others find it in popularity. Or, more commonly, we find it in a combination of any number of things – from beauty, to money to power. But at the basest of levels we want life to mean something.

In the coming weeks and months I will be exploring this idea of meaning, from the paradox of an artist needing to convey meaning to be meaningful to the meaningfulness of a cold beer, this blog will be devoted to meaning. I hope to publish between two and three posts a week, with a Saturday evening post being devoted to beer. So with that in mind…
:Sierra Nevada Summerfest Lager:
This cold-brewed beer espouses some of the traditional characteristics I have come to expect from a cold-brewed barley-pop: Light color, middle pallet flavor and a dry roasted aftertaste. The major drawback for this beer is its largely unoriginal flavor. This could be one of any number of Craft brewed Lagers, and as such fails to distinguish itself from even some more mass produced varieties such as Harp. It still beats having no beer, but at $14 a 12 pack, it is over-priced by my estimation. As a pairing note, a mid-quality bourbon such as Makers Mark brought out a latent sweetness in the beer, and added to the overall experience.
Final verdict: 2 out of 5 Stars – **
Posted in Saturday Evening Post